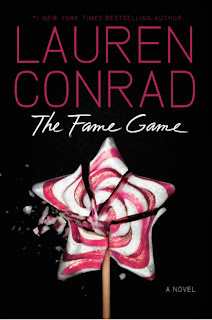 In Hollywood, fame can be found on every corner and behind any door. You just have to know where to look for it. Nineteen-year-old Madison Parker made a name for herself as best frenemy of nice-girl-next-door Jane Roberts on the hot reality show L.A. Candy. Now Madison's ready for her turn in the spotlight and she'll stop at nothing to get it. Sure, she's the star of a new show, but with backstabbing friends and suspicious family members trying to bring her down, Madison has her work cut out for her. Plus, there's a new nice girl in "reality" town—aspiring actress Carmen Price, the daughter of Hollywood royalty—and she's a lot more experienced at playing the fame game... When the camera's start rolling, whose star will shine brighter?

Filled with characters both familiar and new, Lauren Conrad's series about the highs and lows of being famous delivers Hollywood gossip and drama at every turn.

I picked this book up because I’d read all three LA Candy books and I thought there might be something interesting about it. I read LA Candy because I’ve never been on a reality show and I wanted to see what the behind-the-scenes would be like, that’s the same reason why I read A Model Summer by Paulina Porizkova two summers ago, I didn’t know what it was like in that world and I was curious. If you’ve read LA Candy, and unless you’re obsessed with Lauren Conrad and want to gobble up anything she makes, you can skip this one. If you haven’t read LA Candy, you can give this one a shot.

The book has familiar characters from the old series (Madison Parker & Gaby Iforgetherlastname) and some new ones but I just couldn’t find myself interested in any of the characters. You could see the next plot point eight chapters ahead and, because I’d read LA Candy, I didn’t have any sympathy/surprise for the characters when things happened that you knew were going to happen anyway! I found Madison more likable in this book but not what I wanted, I would have preferred if she was a true villain who was still calling magazines to get covers and was more obsessed with the tabloid/ “real” world than the reality show, Lauren Conrad covered reality shows in LA Candy and this book didn’t really add anything to the game.

What I didn’t like about this book: It was predictable, characters were one-dimensional, but maybe, maybe, one could be considered two-dimensional by the end.

What I liked about this book: It was an easy read, the plot was semi-interesting (hey, I finished it!)

Who would enjoy this book? Anyone who is obsessed with Lauren Conrad and will gobble up anything she touches. Or, if you haven’t read LA Candy, you might get more excitement out of this book than I did.

What type of read is it (one word!)? Easy

Would I recommend this book? It’s easy, holds your attention, but you don’t think that much about it after. If you haven’t read LA Candy and , you might get more out of this. I wouldn’t give it a ringing endorsement though.

Which character was my favourite? Madison was the most interesting, but she was a 3/5 when every one else hovered around 1 or 2.

Will I read it again? Nope.

Review (in related to my reading style): I think this proves that if I read a book about something I want to know more about once, I don’t need to read the same style of book again, unless I really care about the plot.

Allie Reads
I'm Allie and I absolutely love to read. In all the ways life can be distracting, this is my declaration the world/internet to recommit myself to one of my first loves. I find that time can slip away from you and you end up spending half your time doing things you don't want to, so this is my way of prioritizing something I truly wish I devoted more time to. I am open to suggestions so please send me a message with a book recommendation and why! Always Learning.