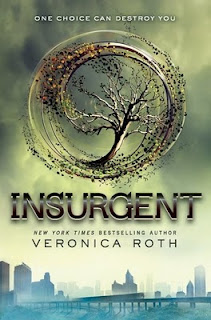 
One choice can transform you—or it can destroy you. But every choice has consequences, and as unrest surges in the factions all around her, Tris Prior must continue trying to save those she loves—and herself—while grappling with haunting questions of grief and forgiveness, identity and loyalty, politics and love.Tris's initiation day should have been marked by celebration and victory with her chosen faction; instead, the day ended with unspeakable horrors. War now looms as conflict between the factions and their ideologies grows. And in times of war, sides must be chosen, secrets will emerge, and choices will become even more irrevocable—and even more powerful. Transformed by her own decisions but also by haunting grief and guilt, radical new discoveries, and shifting relationships, Tris must fully embrace her Divergence, even if she does not know what she may lose by doing so.New York Times bestselling author Veronica Roth's much-anticipated second book of the dystopian Divergent series is another intoxicating thrill ride of a story, rich with hallmark twists, heartbreaks, romance, and powerful insights about human nature.

Review:
I downloaded this book to my tablet immediately after finishing Divergent, I wanted more of the story and I couldn't wait to read this one. My overall review was that it was entertaining and there were great dimensional characters but it didn't have the intrigue that the first one did and I predicted some of the plot movements fairly ahead of schedule. You do get to learn more about the other factors, which was appreciated. Veronica Roth also continued her story-telling ability that you can't even put down the book it's so good and you can't wait for the next novel.


If there's one thing Veronica Roth does well it's creating dimensional characters and adhering to the belief that nobody is "all good" or "all bad" - even the main character and her love interest have faults. So although I enjoyed Insurgent and the characters were dimensional, I was left wanting more from fleshing out the world and making it more believable. The novel didn't truly explain how divergents exist and what causes them, which I feel would have provided some satisfaction. I'm only going to give this novel a 4 out of 5 because I had such high hopes of the world exploding into detail in this novel and I just felt unsatisfied and like there weren't clever enough explanations.
What type of read is it (one word!) EntertainingWho would enjoy reading this book?  If you enjoyed Divergent, then definitely pick up this novel as it continues the story
Will I read it again? Possibly, I might re-read both novels before the third and final in the series comes out. This novel was a quick read.
Which dimensional character was I rooting for most? Peter Overall review: 4/5
Questions:

Do you have any recommendations for me to read next? Please send me a message if you do, I'm open to all suggestions.
Posted by Allie Reads at 06:37

Allie Reads
I'm Allie and I absolutely love to read. In all the ways life can be distracting, this is my declaration the world/internet to recommit myself to one of my first loves. I find that time can slip away from you and you end up spending half your time doing things you don't want to, so this is my way of prioritizing something I truly wish I devoted more time to. I am open to suggestions so please send me a message with a book recommendation and why! Always Learning.